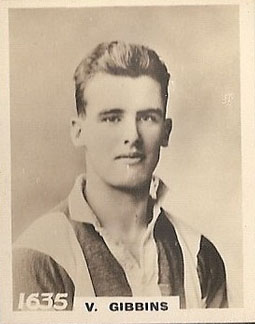 William Vivian Talbot (Viv) Gibbins was born in Forest Gate on 10th August 1901.
A talented footballer, he played for Clapton while training as a schoolteacher.  In 1923, whilst still at the Dog, he signed as a amateur for West Ham United and he made his debut for the Hammers in a game against Nottingham Forest on 15th December 1923.

Gibbins continued to play for Clapton and he won the FA Amateur Cup with the club in 1924 and 1925. Gibbins also won two amateur international caps against France during this period.

Still on the books of West Ham, Gibbins’ played in only one game for West Ham United in the 1925-26 season and scored two goals in the 6-0 victory over Bolton Wanderers.

Whilst registered with Clapton, he made two England appearances, both against France, scoring twice in a 3-1 victory on 17 May 1924 and once on 21 May 1925. Gibbins went off injured after 35 minutes of the latter game.   England finished with nine men, but managed to hang on to win the game 3-2.  Gibbins was one of the last amateur footballers to feature for England.

The 1926-27 season saw the beginning of the break up of the famous Clapton Amateur Cup winning teams as Bill Bryant was now playing at Millwall and Stan Earle had moved to West Ham the previous season.  Gibbins was persuaded to link up again with Earle at the Boleyn and made 22 appearances for the irons that season.

Viv Gibbins continued to play at West Ham but his teaching commitments limited his appearances.  However, he remained a consistent goalscorer (total of 63 goals in 138 games).

His time at West Ham ended somewhat acrimoniously when West Ham refused to release him from his one-year amateur contract.  Viv had not been included in the West Ham team and according some newspapers, felt that he was “not being selected for the level of football that his talent warrants.”  At one stage, West Ham offered him professional terms, which he refused, so he eventually he took take his case to the Football Association for adjudication.

A consequence of this was that Clapton benefited by his turning out for the Tons in the meantime (he was still a member), Nonetheless, Gibbins wanted to continue playing in the Football League.   A month later, West Ham released him and he joined Brentford.  He later signed for Bristol Rovers and Southampton before joining Leyton for whom he played in the 1934 Amateur Cup Final.

The following season Viv joined Catford Wanderers for whom he played until his retirement from the game in 1939.

However, in the 1940s Viv returned to the Old Spotted Dog as trainer of the Clapton team.  (pictured above – back row far right) He was also the headmaster of Harold Road School in West Ham.

The entrance to the Old Spotted Dog Ground at Disraeli Road, Forest Gate is called the Vivian Gibbins Memorial Gate.

This blog contains an anthology of articles featured in Clapton FC programmes and other websites that related to the Clapton Football Club, founded in 1877 as Downs FC. View all posts by Clapton FC