Clapton Football Club won their first senior trophy at the end of their first season at the Old Spotted Dog Ground. Having negotiated the early rounds of the London Senior Challenge Cup, that included a 3-1 home victory against Millwall Athletic (now Millwall FC) the Tons came up against the might of Casuals FC The Casuals were a team that recruited the very best players in Amateur football and had assembled a team especially for the final which was to take place at Kennington Oval. Among their team were the Walters brothers, known as ‘morning and afternoon’ due to their initials A.M. and P.M., and Old Boy football enthusiasts regarded a victory for the Casuals as a certainty. 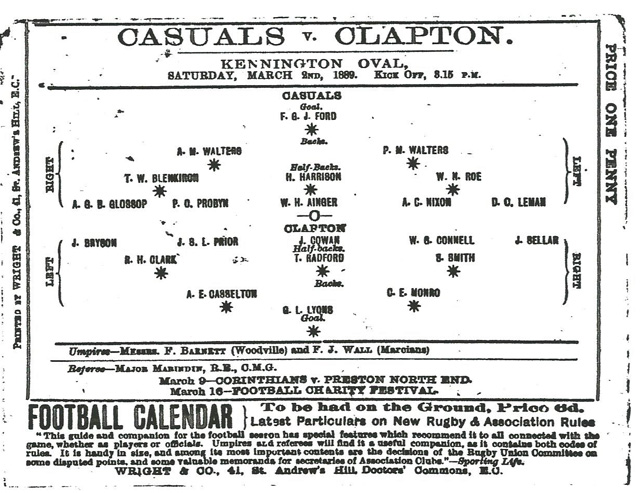 Thanks to Martin McShea and Roy Calmels (Wembley FC) for the copy of the programme sheet.

However, it wasn’t to be as the ‘real club’ triumphed on a snowy day in March with J.S. Sellar, the player who scored the first ever goal for Clapton at the Old Spotted Dog, netting a hat trick. The other goal was scored by J.S.L. Prior.

Extract from the Belfast Evening Telegraph and Star 2nd March 1889

This blog contains an anthology of articles featured in Clapton FC programmes and other websites that related to the Clapton Football Club, founded in 1877 as Downs FC. View all posts by Clapton FC